Top brain cancer experts from across the nation and beyond came together in Orlando last weekend at the invitation of University of Florida Health’s Duane Mitchell, M.D., Ph.D., and William A. Friedman, M.D., world leaders in the quest to significantly improve quality of life and long-term survival for patients fighting malignant brain tumors.

More than 100 expert investigators and physician-scientists from major brain tumor research centers in the U.S., Canada and Germany convened at the inaugural ReMission Summit for Brain Tumors, a conference hosted by UF and UF Health that officially launched a groundbreaking new endeavor to collaborate across institutions in the hunt for new treatments to turn deadly brain cancers into livable conditions.

The weekend conference kicked off with the announcement of a $12 million gift over 10 years from Orlando hotelier and philanthropist Harris Rosen, who lost his 26-year-old son Adam Michael Rosen to brain cancer in November, and culminated in small-group workshops designed to generate four new scientific papers exploring immunotherapy and precision-medicine techniques currently under development for both adult and pediatric brain cancer.

“We know that all of the science that’s going to be presented by the who’s who of the brain tumor world over this next weekend is fabulous, but we also know that each of us alone are not going to be able to solve this problem,” Friedman, co-director with Mitchell of the Preston A. Wells Jr. Center for Brain Tumor Therapy, said in opening the scientific sessions on Saturday morning. “Together, redefining the mission, we hope that within the next 10 years, we will be able to turn brain cancer into a chronic disease.” 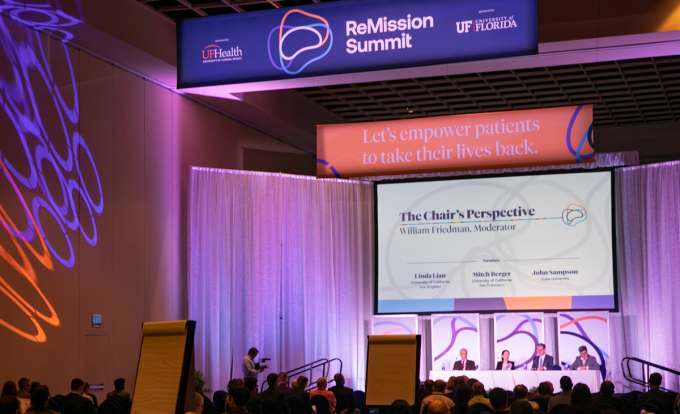 The summit officially launched the new UF Health-led ReMission Alliance Against Brain Tumors, a network of neuro-oncology, tumor immunology and genetics experts from top peer institutions as well as a community of vested collaborators and influencers affected by brain cancer. The alliance will unite them in the pursuit of new lines of research and clinical trials.

In his opening remarks at the summit, Mitchell, co-director of the ReMission Alliance with Friedman, said, “We want this to be an interactive forum where people can challenge each other or push for ideas and questions on what are some of the most important areas we can make strides in this field and what are some of the key unanswered questions we need to address in the treatment of brain tumors.”

Marking the significance of the occasion, among the conference’s attendees were David R. Nelson, M.D., interim senior vice president for health affairs at UF & president of UF Health; Jonathan D. Licht, M.D., director of the UF Health Cancer Center; and Anita Zucker, a UF Board of Trustees member and chair of the ReMission Summit.

For several of the investigators and participants, fighting the devastating disease of brain cancer is deeply personal.

“All of you here today can make the journey toward recovery, toward remission, that much easier,” Zucker said.

“I know firsthand how arduous, how long and trying the journey can be. I lost my husband, Jerry, 11 years ago this April,’’ she said. “To me, dealing with that is one of the most difficult things in life for anyone when you have to deal with the loss of a precious member of your family.”

Peering out at the investigators before her, Zucker said she could see the potential for progress and emphasized that the summit was built around the idea that a multidisciplinary, multipartner approach could pave the way forward.

“We can transform the future of brain cancer research through this summit and the efforts of each of you,” she said. “We’re bonded together. We are driven by the same shared aspiration, a vision of a future where odds have shifted in favor of the patient, where a brain tumor diagnosis is a comma, not a full stop, in a patient’s life.”

Among additional summit highlights were keynote addresses delivered by Gregory C. Simon, president of the Biden Cancer Initiative, and internationally renowned neuro-oncologist Roger Stupp, M.D., of Northwestern University, and the announcement of the $12 million gift from Harris Rosen and The Harris Rosen Foundation. The gift is the cornerstone of a $100 million fundraising commitment to support the ReMission Alliance.

Rosen, owner of the Rosen Shingle Creek hotel where the summit took place, spoke during a dinner Saturday evening of his son’s two-and-a-half year battle against brain cancer. He said his gift was a direct result of the care and compassion his son received from UF Health neuro-oncologists.

Rosen said he believed what differentiates the ReMission Alliance is its groundbreaking collaborative philosophy that undoubtedly will create a new paradigm in cancer research.

“And now, instead of a competitive, non-caring, non-sharing philosophy, the ReMission Alliance shall forever change this rather Stone Age approach to a much more pragmatic, productive and sharing initiative,” Rosen said. “In addition, we have no doubt that this new collaborative philosophy will dramatically impact in a very positive way the timeframe within which brain cancer treatments and cures shall be discovered.”

That collaborative philosophy extends not only to physicians and investigators, but experts in artificial intelligence and engineering who spoke at the summit. Greg Sawyer, Ph.D., a UF professor of mechanical and aerospace engineering who once worked on the Mars rover and since then has overhauled his lab and life’s work to focus on 3D manufacturing of tissues and cells after his own diagnosis of advanced cancer in 2013, brought his perspective as a luncheon speaker and a workgroup participant.

“What’s unique about this particular conference was the juxtaposition of people outside of the field,” said Amy Heimberger, M.D., a professor at MD Anderson Cancer Center in Houston. “Engineers ask, ‘Are you examining your failures? Are you really looking at them carefully?’ … It’s been a wonderful opportunity to get those different perspectives from an engineering and systems biology approach.”

For his part, Sawyer said he hoped to foster more collaboration across the disciplines, and he spoke of the importance of learning from failure — something he said engineers are very good at.

“There are engineers out there who are ready to help, and can help, and it’s going to take some work to find how to communicate with one another,” he said. “But these two fields need to come together, and I think the successes are going to be found in the intersections.”

Sawyer contributed Sunday to one of four workgroups brainstorming two emerging approaches currently dominating the field: precision medicine, an approach that takes into consideration each individual’s variability in genes, environment and lifestyle; and immunotherapy, which aims to harness the power of the body’s own immune system in fighting cancer.

Two workgroups focused on pediatric brain cancer and two on adult, and plans call for publishing scientific papers on the important advances brought to light at the summit, which will reconvene annually over the next 10 years.