A newly published study by University of Florida physician-researchers demonstrates a noninvasive way to predict long-term outcomes among stroke patients by measuring the width of optic nerve linings using ultrasound.

The single-center, 86-participant study, published in November in the journal Critical Care Explorations, found that an increase in the measurement of the optic nerve sheath diameter in the acute stage after an ischemic or hemorrhagic stroke was associated with increased in-hospital death or poor neurocognitive functioning.

“This study provides the justification for larger, multi-center trials using this technique to measure the optic nerve sheath diameter in stroke patients during the first 24 hours after hospital admission to better predict outcomes,” Pizzi said. 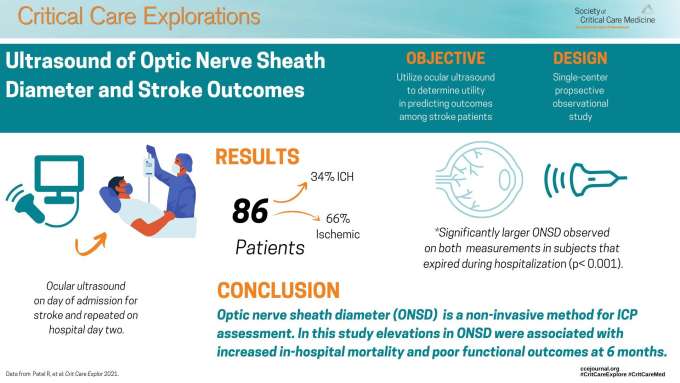 The study was initiated and developed by Patel and carried out in 2013 by a team including UF faculty members from anesthesia, critical care, neurology, neurocritical care and neurosurgery and collaborators at Yale University and the University of Southern California.

For the study, a noninvasive ultrasound probe was placed on the patient’s eye, and measurements of the optic nerve and its nerve sheath were taken. Previous studies in traumatic brain injury patients have demonstrated poor neurologic outcomes when the optic nerve sheath diameter is increased.

Optic nerve lining measurements, the researchers reported, “may be used to screen stroke patients at risk of poor prognosis, especially when used in conjunction with abnormal clinical examination and CT imaging. Prospective randomized controlled studies need to be performed to identify interventions that may affect outcomes.”