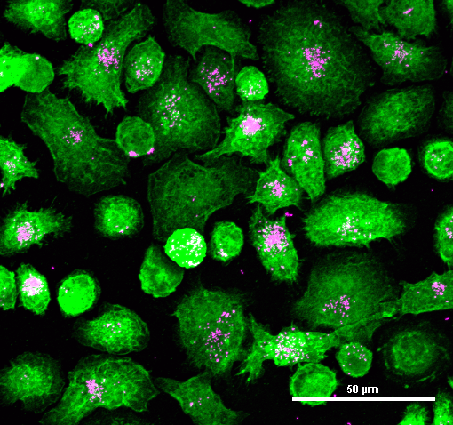 New research led by University of Florida neuroscientists shows that a protein called dopamine transporter, which is responsible for regulating levels of the chemical messenger dopamine in the brain, also might have a role in fine-tuning the response of specific immune cells in the blood to inflammation.

Led by Habibeh Khoshbouei, Ph.D., Pharm.D., and Phillip Mackie, an M.D.-Ph.D. fellow in the Khoshbouei lab, the study builds upon their previous work investigating possible links between levels of dopamine — a neurotransmitter key to reward-seeking, motivation and movement — and inflammatory response in immune cells that are dysregulated in Parkinson’s disease.

“Neurotransmitter transporters are thought to mainly exist in the cells of the brain where they control how neurons talk to one another,” he said. “However, we found that a subset of these proteins, namely the dopamine transporter and norepinephrine transporter, are also on peripheral immune cells called macrophages, one of the body’s essential defenders.”

The hope, Mackie said, is the findings will open a new path of research in the interdisciplinary field of neuroimmunology and prompt further study of neurotransmitter transporters and the peripheral immune system for both basic science and translational purposes.

“Our next step is to apply our findings to diseases of inflammation and neuroinflammation to ask how the dopamine transporter can be targeted in these conditions,” he said.

Read the paper in JCI Insight.