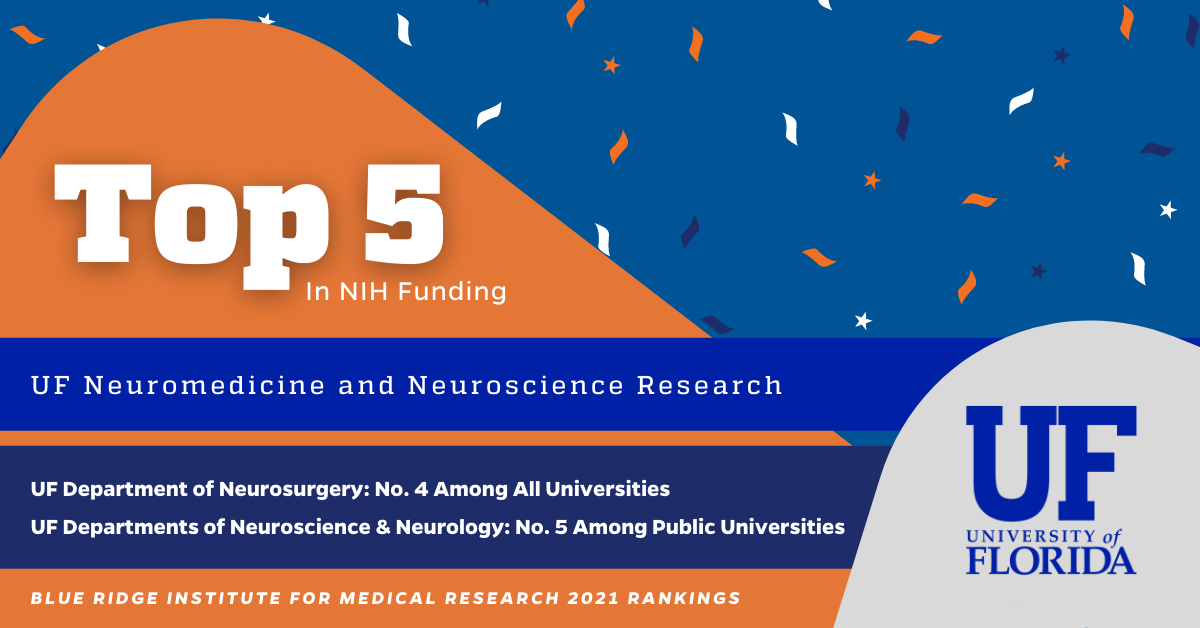 By Michelle Jaffee and Todd Taylor

Neuromedicine and neuroscience research at the University of Florida ranked Top 5 among the nation’s public universities in the 2021 rankings of National Institutes of Health funding published by the Blue Ridge Institute for Medical Research, released Feb. 8.

“Our leading-edge research in the fields of neuro-oncology, neurovascular conditions including stroke and movement disorders has propelled us to our Top 5 goal,” said Brian L. Hoh, M.D., M.B.A., chair of neurosurgery. “We will continue to serve as a leader in research and innovation, and we are translating these scientific discoveries from the lab to the bedside, improving care for patients.”

“This ranking reflects our faculty’s ongoing dedication to innovative research in areas including cognitive aging, mental health and neurodegenerative diseases,” said Jennifer L. Bizon, Ph.D., chair of neuroscience. “A commitment to making fundamental discoveries that elucidate disease processes and drive new therapies continues to define our neuroscience community as one of the best in the nation.”

Altogether, the combined $28-plus million in NIH funding earned by the UF departments of neurosurgery, neuroscience and neurology is an all-time high.

“This success is due to strategic collaborations and partnerships, and it is best measured by the number of lives we have impacted and how much we have advanced the science,” said Michael S. Okun, chair of neurology and executive director of the Norman Fixel Institute for Neurological Diseases at UF Health. “The future of neuromedicine and neuroscience will be pushing to the edge of innovation by delivering new therapies for those with neurological diseases. Our interdisciplinary model of care and research is lifting us to new heights.”

Read UF College of Medicine’s story about its college and department rankings.