A new state-of-the-art surgical device called the Robotic Stereotactic Assistance Brain is now in use at UF Health Neuromedicine Hospital, and it’s enhancing surgical options for patients with epilepsy.

The procedure — stereotactic electroencephalography, or sEEG — uses stereotaxytechniques similar to those pioneered by the UF team of neurosurgeon William Friedman, M.D., and medical physicist Frank Bova, Ph.D., to locate the source of seizures in patients with epilepsy by placing small electrodes within brain tissue. Once the source has been located, the patient returns some weeks later to have that area treated by surgery, targeted laser ablation or, in certain cases, neuromodulation.

“The acquisition of this robot demonstrates UF Health’s commitment of providing the most advanced technologies to our patients,” said Bova.

UF Health’s sEEG program launched in 2017 and allows UF’s Comprehensive Epilepsy Program team to expand its care to a broader range of patients.

“The sEEG procedure represents a significant improvement over previous methods and a major advancement in our epilepsy care,” said Steven Roper, M.D., surgical director of the epilepsy program.

Neurosurgeons use the ROSA Brain robot and its software to create a 3D map of the patient’s brain and plan out the pathways needed to carry out the procedure. The robot is aligned to the trajectories outlined by the surgical plan, and the surgeon uses the robot as a guide. 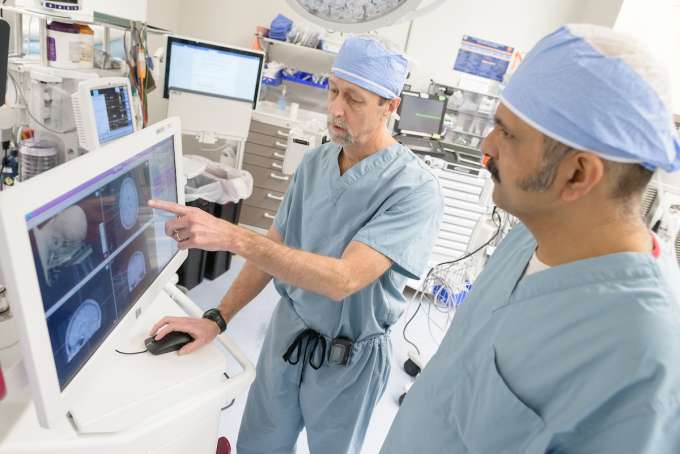 “The robot automatically moves from one electrode’s trajectory to the next,” said Roper, a professor of neurosurgery who conducted UF Health’s first surgery with the robot in January. “This makes the operation much faster than the traditional methods where we would manually readjust a stereotactic frame from one trajectory to the next. It also allows for more efficient fine-tuning of the trajectories at the time of surgery.”

Giridhar Kalamangalam, M.D., DPhil., medical director of the epilepsy program and chief of the division of epilepsy at the UF College of Medicine, believes that the sEEG procedure — enhanced by the ROSA Brain robot — will improve patient care and advance research.

“We are now able to help patients whose cases were too high-risk previously. We can probe the brain more extensively and safely so that operations to help patients with the most difficult epilepsies become realistic,” said Kalamangalam, the Wilder Family Professor for Epilepsy. “In addition, as the procedure becomes more utilized, information about signals in previously hard-to-reach parts of the brain will become available for research. We will begin to understand aspects of the function of previously ‘hidden’ regions of the brain that will complement other traditional methods such as brain scans. This is potentially a big step forward for UF neuroscience.” 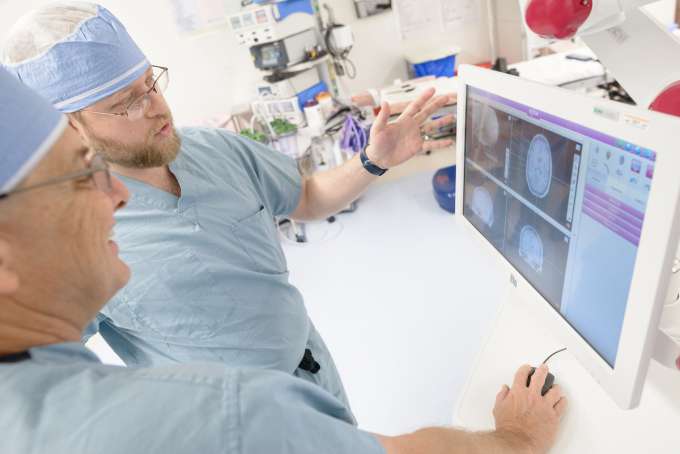 The ROSA Brain robot also has the potential to be used for other stereotaxic procedures, including biopsies, laser ablation surgery and deep brain stimulation.

UF’s Comprehensive Epilepsy Program is designated Level 4 by the National Association of Epilepsy Centers, its highest designation. Level 4 programs provide more complex forms of intensive neurodiagnostics and monitoring, as well as more extensive medical, neuropsychological and psychosocial treatments. These programs also offer a complete evaluation for epilepsy surgery, including intracranial electrodes and a broad range of surgical procedures for epilepsy.

Visit bit.ly/2GJleQG to learn more about the epilepsy program.