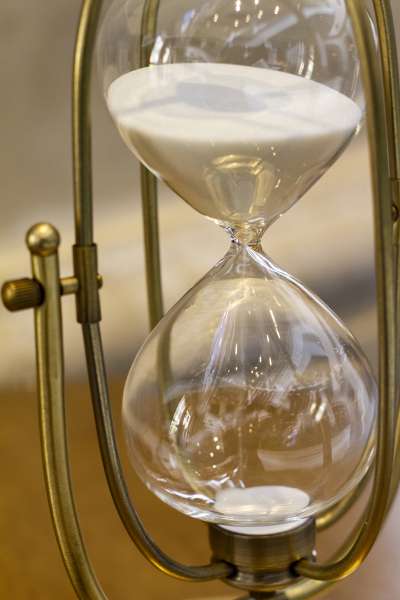 Every morning, Duane Mitchell, M.D., Ph.D., looks at an hourglass on his dresser given to him by the parents of University of Florida graduate and lacrosse captain Jamie Chapin, who died of brain cancer at age 25 in 2011.

The hourglass serves as a daily reminder that time is running out for patients with malignant brain tumors and that the need is urgent to discover new treatments for a disease that has had stagnant survival rates for 30 years, even as rates for some other cancers such as leukemia have improved markedly.

The weekend of Feb. 21-23, Mitchell and the UF brain tumor team he co-leads brought together expert investigators, physician-scientists and passionate supporters from across the U.S. and beyond to form new partnerships and collaborate in pursuit of discovering new immunotherapy regimens to improve quality of life and turn deadly brain cancers into livable diseases within 10 years. Representing 12 top academic medical centers, the experts belonging to the new UF Health-led ReMission Alliance Against Brain Tumors each accepted an hourglass like Mitchell’s, presented by Jamie Chapin’s parents.

“It really embodies the sense of urgency that all of us in this room share and bring to work every day, but it’s been a poignant reminder of why our efforts are really important, and accelerating those efforts is really critical and timely,” Mitchell, co-director of the ReMission Alliance and UF’s Preston A. Wells Jr. Center for Brain Tumor Therapy, said in his opening remarks at the second annual ReMission Summit for Brain Tumors. “What makes the ReMission Alliance so special is that everyone involved is singularly focused on finding a cure for brain cancer,” said Maryam Rahman, M.D., an assistant professor in the Lillian S. Wells Department of Neurosurgery in UF’s College of Medicine. “Most places work in silos, and that’s incentivized by wanting to have the most funding and have the most manuscripts. Competition definitely drives people to be better, but when you can combine competitiveness with collaboration with the best and brightest in the field, and combine that with friendship, that’s when you can actually achieve progress.”

The summit kicked off with two significant announcements. The first was a $3 million pledge from Anita Zucker, a UF Board of Trustees member and co-chair of the ReMission Summit, to UF and UF Health to establish an endowed chair in neurosurgery. Michael and Tina Kanis of Holland, Michigan, then made a $2 million pledge in memory of their 9-year-old daughter Caroline, toward a UF-led collaborative pediatric brain tumor research project with Helen DeVos Children’s Hospital in Grand Rapids, Michigan.

Families were an integral part of the summit: Zucker, a UF alumna who is chair and CEO of InterTech Group, spoke of losing her husband, Jerry, to brain cancer, and her co-chair, Orlando hotelier and philanthropist Harris Rosen, spoke of losing his 26-year-old son Adam Michael Rosen.

“I couldn’t change the outcome of what happened to my husband, but I certainly hope with the work that all of you are doing that outcomes for others will certainly be different and much more positive,” Zucker said. “Strengthening the partnerships and forging new research connections is so critically important, and together we will defeat brain cancer.”

Last year’s inaugural summit officially launched the ReMission Alliance, a network of neuro-oncology, tumor immunology and genetics experts and vested collaborators and influencers affected by brain cancer, created to pursue new lines of research and clinical trials. A $12 million gift over 10 years from Harris Rosen and The Harris Rosen Foundation is the cornerstone of a $100 million fundraising commitment to support the ReMission Alliance and research at UF Health, contribute vital seed money to the alliance and add significantly to the UF Health Cancer Center’s growing resources to fight fatal diseases.

Rivkees noted that brain tumors continue to be the No. 2 cause of cancer in children, second to leukemia, which is the same as 30 years ago. But while the mortality rate for pediatric leukemia has improved from 30-40% to less than 20% today, the mortality rate for pediatric brain tumors has remained essentially the same at greater than 50%, he said.

“In adults, the mortality rate for brain cancers is very similar to what it was 30 years ago,” Rivkees told the researchers. “We need to do better.”

Amy Heimberger, M.D., a professor of neurosurgery at MD Anderson Cancer Center in Houston, said already, emerging concepts and clinical trial designs are forming as a result of the summit.

“The ReMission Alliance draws from the strengths from each institution,” Heimberger said. “Everyone is extremely enthusiastic about immunotherapy for brain tumor patients, and there are many sites that do try to do these clinical trials, but there are key things you want: You want to be able to image the exact kind of immune cell that you’re infusing or you want to be able to understand the biology in a way that maybe your center doesn’t have the capabilities of doing.

“The ReMission Alliance,” she said, “brings together the key strengths of each of the participating sites to really act in synergy so that we can have a maximal impact on our patients.”