The Evelyn F. and William L. McKnight Brain Institute celebrated its 20th anniversary in 2018. Our keynote speakers to mark the occasion were Mary Woolley, president of Research!America, the nation’s largest nonprofit public education and advocacy organization for medical and health research, and Jennifer French, executive director of the Neurotech Network and one of the world’s first “bionic women.”

French is an incomplete quadriplegic who, thanks to advancements in assistive technology, can stand, transfer, exercise and live independently. In a moving talk, she reminded us of how our science can transform lives, and of the importance of partnerships between scientists, patients and patient advocates.

Woolley discussed the important role of advocacy by scientists and the need to communicate what we do in simple terms. She stressed the importance of creating a dialogue with our legislators and doing so with an engaging and concise message about our science. Indeed, her formula of describing “Then, Now and Imagine” is what we will use to describe how far the MBI has come and our vision for the future.

Then: Twenty years ago, MBI founding director William Luttge, Ph.D., described his vision for the MBI, which still resonates today. The MBI would provide the intellectual and physical infrastructure to support rapid advances in the fundamental understanding of the normal, injured or diseased nervous system using the most contemporary research tools.

With the opening of the MBI, neuroscience at UF was, literally and figuratively, put on the map, but Luttge also knew the fundamental need for such an institute. His answer to the question, “Why do we need a brain institute?” was simple — “Neurological disease is a huge problem.” His forward-looking solution to this problem was to establish a focal point — i.e., an institute — to develop the multidisciplinary teams and approaches to rapidly translate fundamental findings into clinical and commercial applications.

Now: The MBI has renewed its role as the administrative home and coordinating center for neuroscience and neuromedicine research on the UF campus. Although it is also the name of a building, the MBI is truly an institute without walls. Across campus, over 200 faculty conduct neuroscience research, with hundreds of trainees embedded in our laboratories. Collectively, our National Institutes of Health funding for 2018 was approximately $50 million, which is remarkable growth given that NIH funding ranged from $25 million to $30 million per year from 2008-2014. 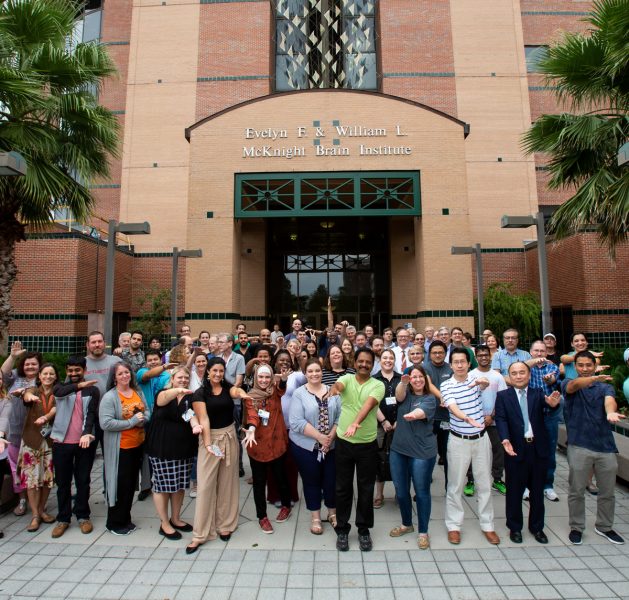 The multidisciplinary teams Luttge imagined are now in place and making a difference. UF teams have contributed to notable advancements, including deep brain stimulation for movement disorders and novel immunotherapies for incurable brain cancers. Yet, the statement that “neurologic disease is a huge problem” remains unchanged. If anything, the problem is larger due to our aging population.

In addition to research, the MBI invests in efforts to complement existing educational programs, support travel, provide training enhancement opportunities and host conferences. Outreach efforts include hosting scientific leaders from other institutions and supporting philanthropic partners to leverage their efforts.

We dramatically increased the visibility of MBI researchers through enhanced communications efforts. In 2018, our website had over 70,000 page views — a 40 percent increase from 2017. Our researchers’ articles in The Conversation were read over half a million times and picked up by major publications including Scientific American, Smithsonian Magazine and the Chicago Tribune. We launched Facebook and Twitter accounts to further disseminate our researchers’ work to new audiences.

Imagine: Working together, we will change the lexicon regarding many neurologic and psychiatric diseases and disorders and the effects of brain aging from inevitable, untreatable and incurable to preventable, treatable and curable. Our amazing faculty and staff, who are dedicated to making a difference, will leverage our intellectual capital and developing technologies to make discoveries and impacts that will translate into interventions that benefit patients’ lives.