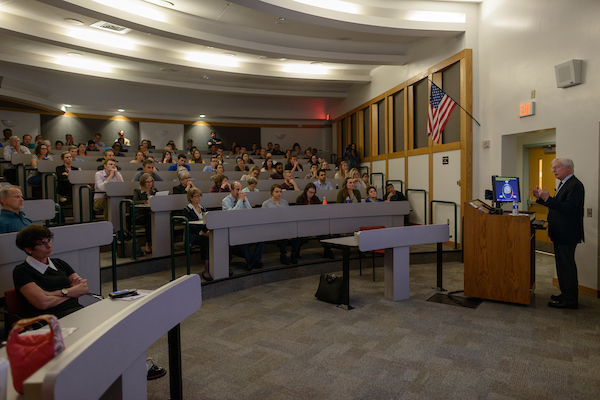 The national focus on the opioid crisis has resulted in a big push to treat addiction in general, including alcohol use disorder, a major burden that affects 15 million Americans, said George F. Koob, Ph.D., director of the National Institute on Alcohol Abuse and Alcoholism, to a standing-room-only crowd in the Evelyn F. and William L. McKnight Brain Institute of the University of Florida’s DeWeese Auditorium.

Koob, an internationally known expert on the interaction of alcohol and stress and the neurobiology of alcohol and drug addiction, discussed the state of alcohol use disorders in the U.S. and the pursuit of new treatment targets during his delivery of the seventh annual William G. Luttge Lectureship in Neuroscience on Monday.

Koob, who oversees a wide array of alcohol-related research stretching from understanding basic mechanisms to improving diagnosis and prevention, noted that while 2 to 3 million Americans suffer from opioid use disorder, the U.S. has been losing about 90,000 people a year to alcohol use disorders for a long time, and in the last 10 years, there has been an increase in binge drinking.

“There has been a steady increase in alcohol-related emergency room visits over the last decade,” he said, nothing that alcohol is involved in about 15 percent of opioid overdose deaths.

Brain Awareness Week, a global campaign to increase public awareness for brain research, continues at UF this week with undergrad and graduate neuroscience students deploying to 19 public schools and one private school across the Gainesville region to share insights into the workings of the brain through interactive demonstrations of the five senses. On Wednesday, the UF students — members of the North Central Florida Chapter of the Society for Neuroscience — hosted field trips of high school seniors from Eastside High School’s IB program as well as homeschooled students.