Using a publicly accessible library of intracranial electroencephalography (iEEG) of epilepsy patients, University of Florida neuroscientists have developed a novel map of the human brain in sleep and wake states, yielding new observations about brain behavior during the circadian cycle. The findings were published online April 1 in the journal Clinical Neurophysiology.

Led by Giridhar Kalamangalam, M.D., D.Phil., division chief of epilepsy in UF’s department of neurology, the brain map provides fresh insights into the behavior of different brain regions during sleep-wake cycles. For example, the study found that during the rapid eye movement phase of sleep, known as REM, some areas of the brain wake up and some don’t, Kalamangalam said.

“If you look at brain waves when someone is asleep or awake, it looks very different,” he said. “The significance of this is that is tells us in a direct way how brain regions differ in their sleep-wake cycles and also what processes are common to the sleep and waking brain rhythms.”

The new study builds upon research published last year by Kalamangalam’s team using the same open-access database, the Montreal Neurological Institute Atlas, a multi-institutional collection from 106 epilepsy patients who as part of their clinical care underwent placement of electrodes inside the brain to map seizures. The team’s first study, also published in Clinical Neurophysiology, produced a 3D animation of a representation of the iEEG on the gyral and inflated surfaces of the brain.

One limitation of the studies is that the data is exclusively from patients with epilepsy, since only certain patients undergo surgical procedures to obtain recordings from within the actual substance of the brain. Nevertheless, such recordings provide a rare opportunity for a deeper look at brain waves, compared with traditional EEG, in which electrodes are affixed to the scalp. Intracranial EEG provides unique access to uncover novel information about the brain, Kalamangalam said.

The data used for the brain map only included recordings from areas of the patients’ brains that were judged to be functioning normally, providing a dataset that the researchers believe closely mirrors a normally functioning brain. 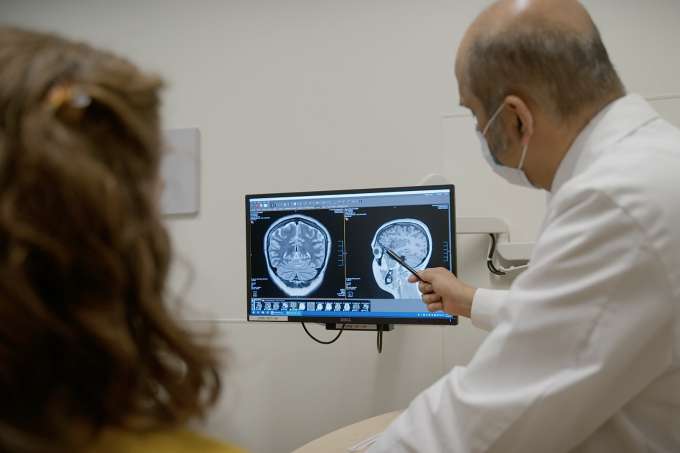 “We were able to then look at the entire brain, top to bottom, inside out, if you like, and see the evolution of the brain waves, see how things change as we go to sleep and as we wake up,” Kalamangalam said. “And in doing so, we found that some parts of the brain behave a little differently from other parts. All of this is new knowledge.”

“There’s information now that we can be awake in one part of the brain and asleep in another part of the brain,” he said. “We’re learning fundamental things about how the brain behaves as we go through sleep-wake cycles. This is important for neuroscience generally and also our field of epilepsy, where some seizure types appear during one portion of the circadian cycle and not another. It is not clear why certain seizures behave in this manner, but our work is a step forward in understanding the puzzle.”

Read the paper in Clinical Neurophysiology.